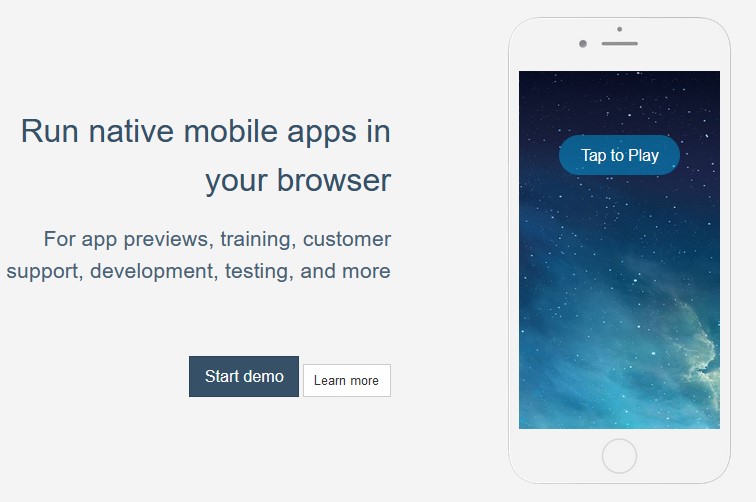 An emulator is a specific program that allows you to run applications on your computer from another device. Now, an emulator can be utilised in different ways. You can run diverse operating systems and enjoy different video games on your Mac or Windows computer. Emulators are cost-efficient as you need no additional hardware to make a copy of one device and implement it on your computer.

In addition, emulators are a big yes when testing some applications on your device. If you own an iOS device, then you must be looking for a worthy iOS emulator for PC. And, there are plenty of choices for iOS emulators for Windows PC and Mac computers.

Let us help you to find a top-notch iOS emulator for PC.

If you’re new to the emulator experience, then you might be in search of a budget-friendly or a free yet compact emulator. Appetize.io is a recommendable emulator with a cross-platform operation and support for iOS applications.

The main attraction of Appetize.io is that the user interface is easy to understand. The emulator comes with very basic configurations, along with cloud-based compatibility for every Windows version out there.

Users might be sceptical about using emulators for iOS due to the storage and resource. Appetize.io is a very lightweight application and requires very few resources. It implies that Appetize.io can process its operations very fast due to minimal resource implementation.

This iOS emulator for PC comes free for an initial 100 minutes, and then you have to pay a fair amount per minute. Appetize.io is compatible with many iPhones, starting from the iPhone 5s. Additionally, it supports some selected iPads and iPods. The iOS selection remains from iOS 10 to iOS 14 for Appetize.io.

We got another superb iOS emulator for PC, and it’s called Smartface. If you are a developer, then you will love this emulator, for sure. When it comes to testing brand new applications in iOS and Android environments, then you can simply sign up with Smartface. Smartface allows you to test your applications with different screen resolutions on different devices.

Just install iTunes on your Windows PC, and you’re good to go with Smartface. The application comes with both free and premium services. Additionally, Smartface is a clutter-free application that allows you to debug your applications without any hassle. Smartface is a brilliant option for iOS and Android emulation on Windows devices.

Only researchers and experts used this emulator in the initial days, but now any user can use this iOS emulator for PC, Mac device, or any other OS-powered device.

Corellium is a perfect match for testing any application, whether a gaming application or anything else. This web-based interface is pretty simple, and you can get a wide range of testing services with Corellium.

If you are searching for an iOS emulator, particularly for Mac devices, then Xcode is something that you should look at. Xcode Software development is Apple’s homegrown development initiative.

Therefore, you can expect only the best iOS emulation on this application. Xcode emulator comes with in-built simulators for iMessage, tvOS, iOS, and watchOS.

You can easily switch to Xcode as it provides you with a primary app development suite. Implement app interactions, such as device rotation, taps, scrolling, and other actions to run a particular application.

Additionally, you can directly launch your applications through Xcode, if you own a Mac device. You can even test web-based applications on Safari using Xcode. And, all that is available for free.

iPadian doesn’t come with the App Store, like other iOS simulators. But, this doesn’t make iPadian any less valued than other available top-notch iOS emulators available in the market. You get access to more than 1000 apps and their support.

The list of applications includes WhatsApp, Facebook, etc. iPadian might seem a little bit pricey, but it provides you with an iPad experience to its fullest on your Windows PC.

Most developers are on a technical hunt for an emulator that offers to test, develop, and redesign iOS applications on Windows PC. Expecting everything under the same roof is not overrated, and the credit goes to Electric Mobile Studio. This popular iOS emulator for PC permits you to modify resolutions.

Additionally, you can easily upgrade or degrade the support for HTML5. This emulator has got a feature-rich palette for designing iOS devices. However, you can use this particular iOS emulator for 7 days at no cost.

After your trial period ends, you have to pay a decent amount to continue with this app. With paid subscriptions, you’ll unlock more features to your iOS application and simulation.

TestFlight is a free emulator, and it comes with support for iOS applications, such as watchOS, iMessage, and tvOS. You can also go for external beta testing for testing your application, and you can do this before conducting the final review of your iOS application.

There’s only one backdrop of this emulator, and that’s a complicated technical setup. Additionally, you have to create a distribution profile for the App Store.

Now, it’s up to you to select the right iOS emulator for PCs. Check out all the features of these emulators, whether they will benefit you personally or professionally. Additionally, don’t forget to look at the pricing of every emulator. Make sure that you choose an iOS emulator that promises cross-platform compatibility along with reliable services. Also, check out iPhone Repair Dubai if you have any problems related to your iPhone.

Can iPhones Get Viruses? How to Get Rid of Them