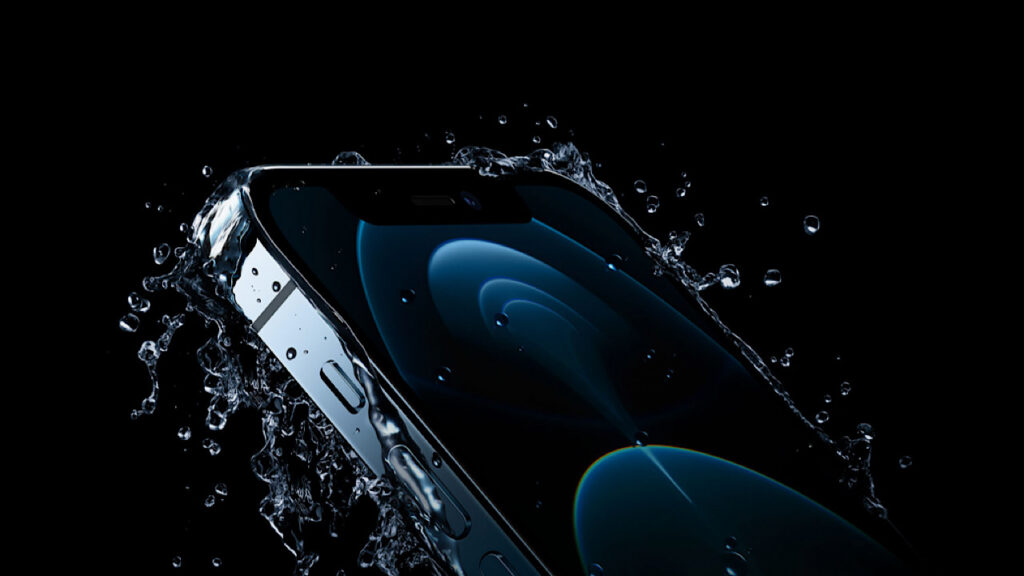 Apple is planning to launch new iPhones with a water-resistant build which can be used in the rain. Developers will introduce new features that will include Wet mode. Users can type even when there are water droplets on the display in this mode.

As per the patent filed by Apple, iPhones will soon be able to detect environmental changes. Based on that, these devices will adjust the screen’s touch sensitivity. This indicates that new iPhones will be able to withstand the water damage. However, when Apple will release this new feature is still not known.

Though all new iPhones have water-resistant screens, you can’t write on them with wet fingers. Besides, the water droplets make it difficult to access different display areas. Apple addresses these issues and is adding new features to improve user experience.

How will this new technology work in Apple’s iPhones?

Apple recently got a patent approved by U.S.P.T.O that suggests that the upcoming iPhone’s display will let you type underwater. It will add a new technology to protect the devices from moisture exposure.

According to reports, the company will use built-in moisture sensors to detect water. These sensors will activate the Wet mode and help the users to type in rain.

Moreover, this new software could change the on-screen button’s size. It will place them further from each other in the display to reduce the chances of accidental touch in rain. Besides, this technology will help you to adjust the screen’s pressure sensitivity. iPhones will only accept commands when it senses touch inputs from users. Thus, it will help iPhones to avoid responding to false inputs registered from rain drops.

The patent explained how this technology would work. The iPhone will detect the moisture amount present in the environment when the Wet mode is on. After that, the processor will determine the position of the device’s buttons. It will then enable the touch sensor to help users to write in the rain.

Besides, we got to know a few more details about this feature from the patent documentation. There will be three modes to configure touch responses – wet, dry and underwater.

How will the wet and dry mode work on the iPhone? The device will change the force input detection to accept touch inputs in these modes.

However, the underwater mode will function differently in the new Apple phones. If you want to use the iPhone underwater, enable this mode to modify the interface. Besides, it will make the device settings simpler for the user’s convenience.

Is Apple bringing any changes to the iPhone Camera app?

The company will add “dry”, “wet”, and “underwater” modes also in the camera app. Users need to enable these features from the iPhone settings. However, you might not be able to use certain features when these new features are on. For instance, some features will be removed from the UI in the Wet mode.

Besides, users will notice larger buttons to use the camera in Underwater mode. The patent filing reveals that it could adjust the white balance settings. Apple will also improve the camera’s clarity in underwater and dry mode. These new will also adjust the ISO sensitivity and display brightness.

How will this new patent improve the upcoming iPhone’ display?

Apple is planning to tweak the iPhone display in such a way that it will work even when it is raining heavily. This advanced technology will detect and eliminate “false taps” on the screen.

Moreover, the accuracy of pressing the right button will increase when the screen is wet. Apart from these, the iPhone screen will automatically change to a pressure-sensitive display.

The “Wet mode” is similar to the MacBook’s “Force Touch” feature. Both of these features activate pressure sensors to improve the user’s typing experience. However, Wet mode and Force touch work for different device components. The former enables touch sensors on display, and the latter does that for Mac’s trackpad.

Which Apple iPhones are waterproof?

Apple claimed that all the latest iPhones are water-resistant. However, typing on display with wet fingers or in the rain is still an issue. The company is trying to resolve this problem by adding this new technology.

iPhones are certified with certain IP ratings that allow them to withstand moisture. But, the touchscreen stops working when the moisture level rises. Apple introduced 3D touch technologies to eliminate the issue. However, this feature didn’t help the users to type on the screen in rain or underwater.

Though, Apple claims that the old models like iPhone 7 or iPhone 6 can withstand water damage. However, these devices can stop working if kept under the water for a few minutes.

Moreover, iPhone XS, iPhone 11 or iPhone 12 models have high water resistance ratings. But, you can’t use the phone if there are rain droplets on the screen. Thus, it can be stated that the existing iPhones are not at all waterproof.

Why did Apple delay the release of  Water-resistant iPhones?

Apple filed the patent for developing new iPhones to work in the rain in March 2021. The authority, though, granted the application in June 2022. But, do you know why the U.S.P.T.O took one year to approve the patent? Well, certain issues can be addressed in this regard. Though the water-resistant devices let you type in the rain, they are not safe to use.

Moreover, an iPhone’s water resistance will decrease with time as the device starts to age. Apple admits this new Wet mode is not the permanent solution for iPhones.

iPhone cameras are not also entirely impervious to water. Thus, even if you enable Underwater mode, the camera can still malfunction. Besides, adding water resistance to iPhones will increase their price. Considering all these concerns, the authority took the time to grant the patent.

How will this new feature protect the upcoming iPhones from water damage?

Apple may add nanocoating on the new iPhone’s internal circuit boards. Besides, developers are planning to apply a water-repellent coating to the iPhone’s exterior to boost protection. The company has been working on this technology for years. It will now implement them in the upcoming iPhones.

When will Apple include this technology in the new iPhones?

Apple keeps on applying for patents to add new features to iPhones. However, it didn’t always include those features in the recent iOS updates. Usually, the company doesn’t add the features if they find any issues during its beta test.

There is also a possibility that Apple tried to add the Wet mode to iPhone 14, but experienced problems. This is why the developers are taking the time to introduce this feature to the users. But, it can be expected that iPhones will have “Wet mode” in the iOS 17 update.